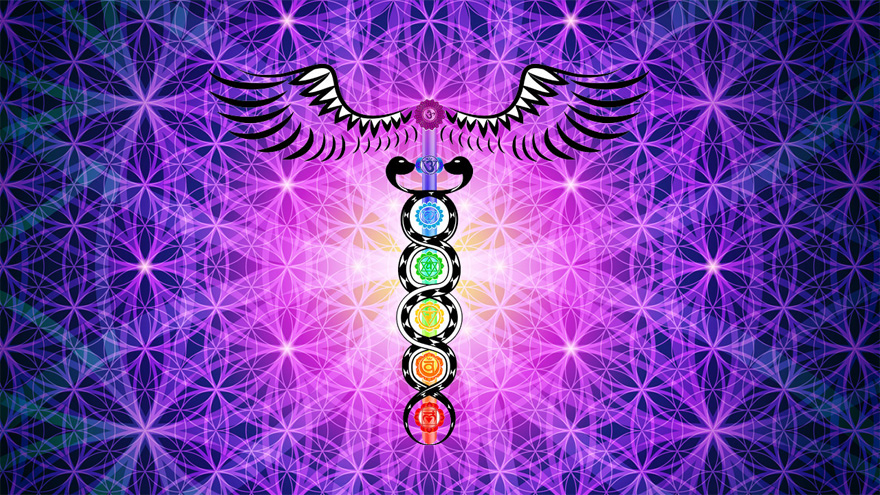 There are the two nerve-currents one on either side of the spinal column. The left one is called Ida and the right is known as Pingala. These are Nadis. Tentatively, some take these as the right and the left sympathetic cords, but they are subtle tubes that carry Prana. The Moon moves in the Ida and the Sun in the Pingala. Ida is cooling.

Pingala is heating. Ida flows through the left nostril and the Pingala through the right nostril. The breath flows through the right nostril for one hour and then through the left nostril for one hour. Man is busily engaged in worldly activities, when the breath flows through Ida and Pingala. When Sushumna operates, he becomes dead to the world, and enters into Samadhi. A Yogi tries his level best to make the Prana run in the Sushumna Nadi, which is known as the central Brahman Nadi also. On the left of Sushumna is situated Ida and on the right is Pingala. The moon is of the nature of Tamas and the sun is that of the Rajas. The poison share is of the sun and the nectar is of the moon. Ida and Pingala indicate time. Sushumna is the consumer of time.

Sushumna is the most important of all the Nadis. It is the sustainer of the universe and the path of the universe and the path of salvation. Situated at the back of the anus, it is attached to the spinal column and extends to the Brahmarandhra of the head and is invisible and subtle. The real work of a Yogi begins when Sushumna begins to function. Sushumna runs along the centre of the spinal cord or spinal column. Above the genital organs and below the navel is the Kanda, of the shape of a bird’s egg. There arise from it all the Nadis 72,000 in number. Of these, seventy-two are common and generally known. Of those the chief ones are ten and they carry the Pranas. Ida, Pingala, Sushumna, Gandhari, Hastijihva, Pusa, Yusasvini, Alambusa, Kuhuh and Sankhini are said to be the ten important Nadis. The Yogis should have a knowledge of the Nadis and the Chakras. Ida, Pingala and Sushumna are said to carry Prana and have Moon, Sun and Agni as their Devatas. When Prana moves in Sushumna, sit for meditation. You will have deep Dhyana. If the coiled-up energy, Kundalini, passes up along the Sushumna Nadi and is taken up from Chakra to Chakra the Yogi gets different sorts of experiences, powers and Ananda. 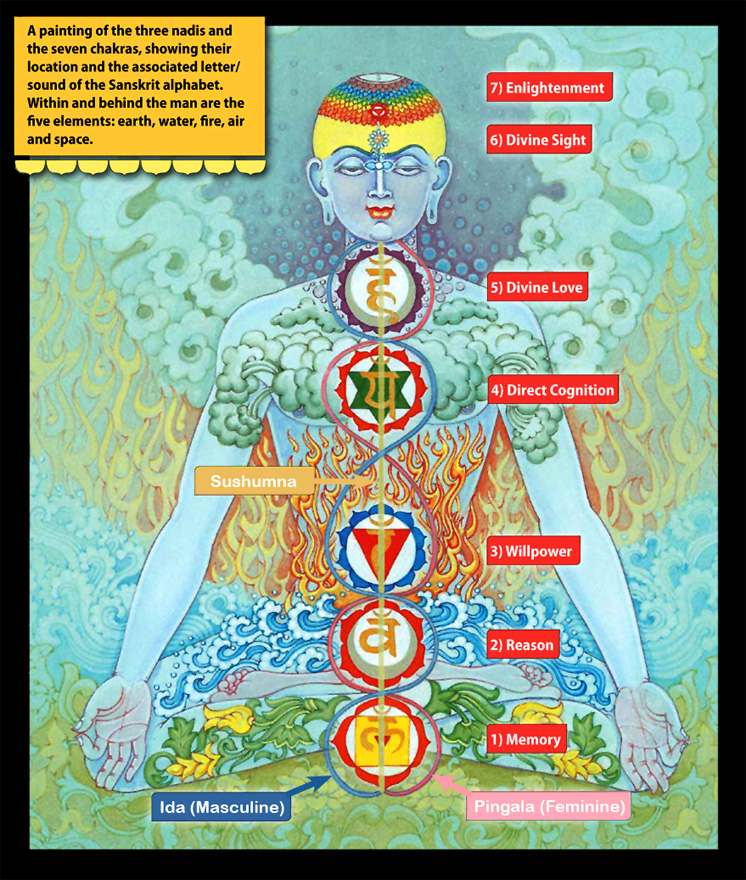 Kundalini is the serpent power or sleeping Sakti, that has 3 1/2 coils with face downwards, in the muladhara Chakra, at the base of the spine. No Samadhi is possible without its being awakened. The practice of Kumbhaka in Pranayama produces heat and thereby Kundalini is awakened and passes upwards along the Sushumna Nadi. The Yogic practitioner experiences various visions. Then the Kundalini passes along the Six Chakras and eventually gets united with Lord Siva, seated on the Sahasrara or thousand-petalled lotus, at the crown of the head. Nirvikalpa Samadhi ensues now and the Yogi gets liberation and all the divine Aishvaryas. One should practise control of breath with concentration of mind. The awakened Kundalini that is taken up to Manipura Chakra may drop down again to Muladhara. It has to be raised again with effort. One should become perfectly desireless and should be full of Vairagya before he attempts to awaken Kundalini. Kundalini is like a thread and is resplendent. When it is awakened it hisses like a serpent beaten with a stick and enters the hole of Sushumna. When it travels from Chakra to Chakra, layer after layer of the mind becomes open and the Yogi acquires various Siddhis (psychic powers). 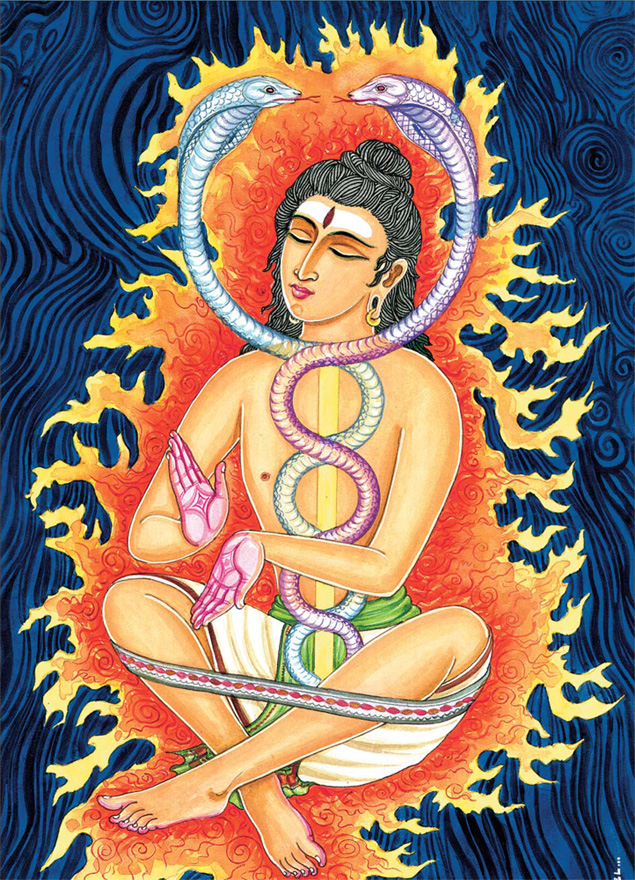 Chakras are centres of spiritual energy. They are located in the astral body, but they have corresponding centres in the physical body also. They can hardly be seen by the naked eyes. Only a clairvoyant can see with his astral eyes. Tentatively they correspond to certain plexuses in the physical body. There are six important Chakras. They are: Muladhara (containing 4 petals) at the anus; Svadhishthana (6 petals) at the genital organ; Manipura (10 petals) at navel; Anahata (12 petals) at the heart; Visudha (16 petals) at the throat and Ajna (2 petals) at the space between the two eyebrows. The seventh Chakra is known as Sahasrara, which contains a thousand petals. It is located at the top of the head. Sacral plexus tentatively corresponds to Muladhara Chakra; Prostatic plexus to Svadhishthana, Solar plexus to Manipura, Cardiac plexus to Anahata Chakra, Laryngal plexus to Visuddha Chakra and Cavernous plexus to Ajna Chakra.

Nadis are astral tubes made up of astral matter that carry Pranic currents. They can be seen by the astral eyes only. They are not the nerves. They are 72,000 in number. Ida, Pingala and Sushumna are the important ones. Sushumna is the most important of all. Purification of Nadis 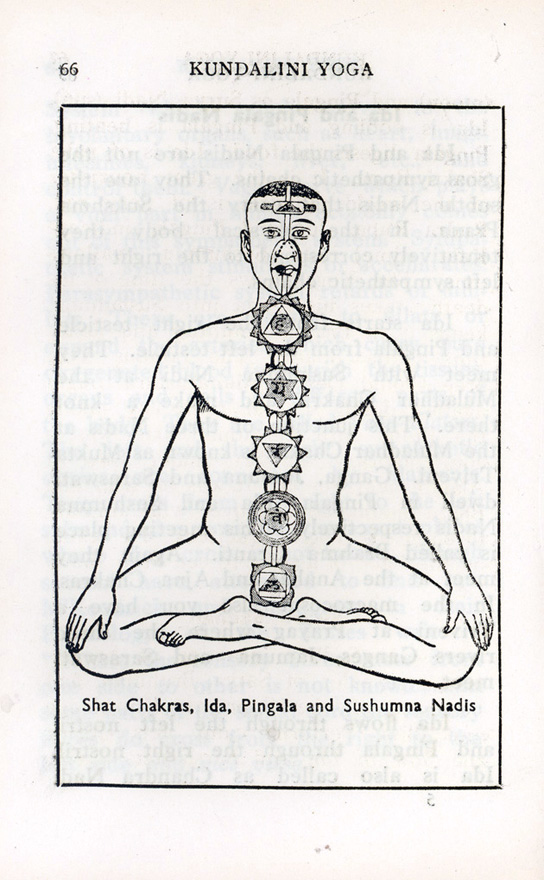 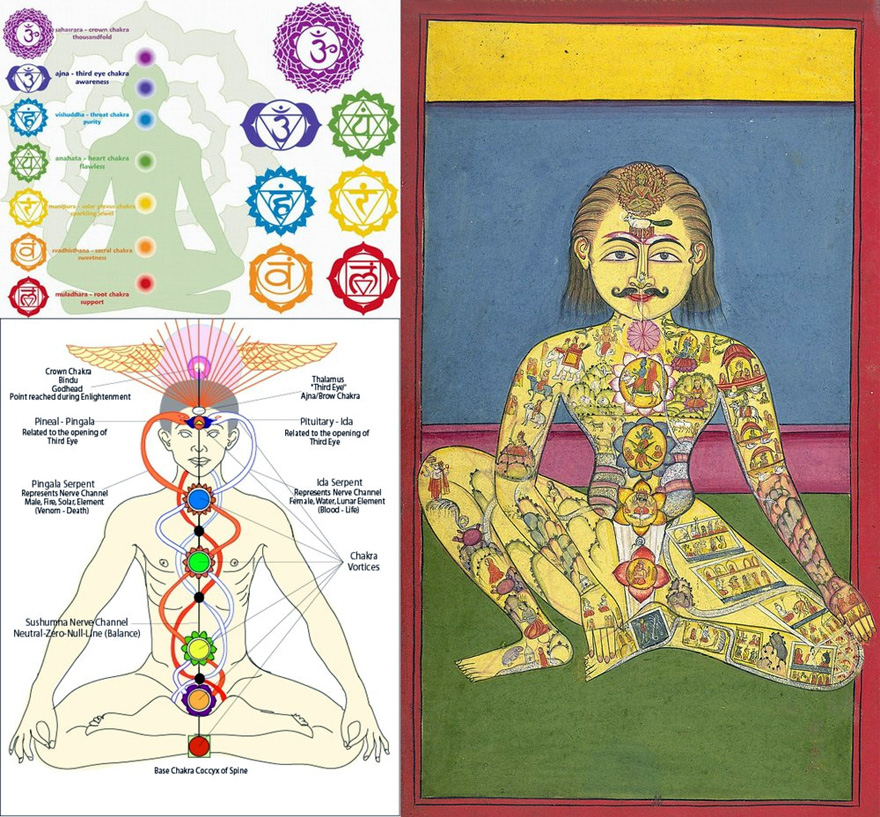 Having become firm in the posture and having preserved perfect self-control, the Yogi should, in order to clear away the impurities of the Sushumna, sit in Padmasana, and having inhaled the air through the left nostril, should retain it as long as he can and should exhale through the right. Then drawing it again through the right and having retained it, he should exhale it through the left, in the order, that he should draw it through the same nostril, by which he exhaled it before and had retained it. To those who practise it according to these rules, through the right and left nostrils, the Nadis become purified within three months. He should practise cessation of breath at sunrise, at midday, at sunset and at mid-night, slowly, 80 times a day, for 4 weeks. In the early stage, perspiration is produced; in the middle stage the tremor of the body; and in the last stage, levitation in the air. These results ensue out of the repression of the breath, while sitting in the Padma posture. When perspiration arises with effort, one should rub his body well. By this, the body becomes firm and light. In the early course of practice, food with milk and ghee is excellent. One, sticking to this rule, becomes firm in his practice and gets no Taapa (burning sensation) in the body. As lions, elephants and tigers are gradually tamed, so also the breath, when rigidly managed, comes under control. 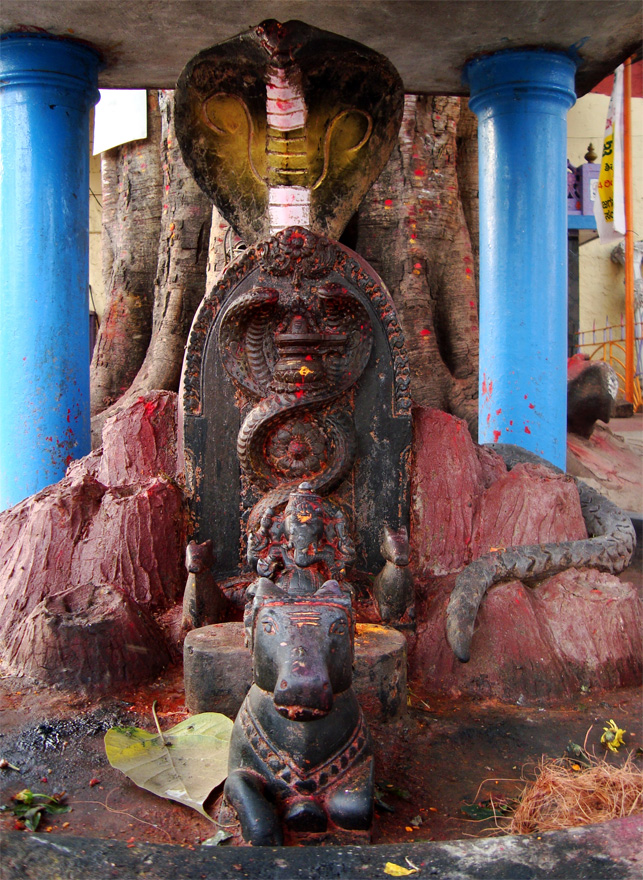 By the practice of Pranayama, the purification of the Nadis, the brightening of the gastric fire, hearing distinctly of spiritual sounds and good health result. When the nervous centres have become purified through the regular practice of Pranayama, the air easily forces its way up through the mouth of the Sushumna, which is in the middle. By the contraction of the muscles of the neck and by the contraction of the one below, viz., Apana, the Prana goes into the Sushumna, which is in the middle, from the west Nadi. Sushumna Nadi is between Ida and Pingala. The Prana which alternates ordinarily between Ida and Pingala, is restrained by long Kumbhaka; then along with the soul, its attendant, it will enter the Sushumna, the central Nadi, at one of three places where it yields space for entrance through such restraint of breath, and in the navel, by the Sarasvati Nadi, on the west. After such entry it is that the Yogi becomes dead to the world, being in that state called Samadhi. Drawing up the Apana and forcing down the Prana from the throat, the Yogi free from old age, becomes a youth of sixteen. Through the practice of Pranayama chronic diseases, that defy Allopathic, Homeopathic, Ayurvedic and Unani doctors will be rooted out.

When the Nadis have become purified, certain external signs appear on the body of the Yogi. They are lightness of the body, brilliancy in complexion, increase of the gastric fire, leanness of the body, and along with these, the absence of restlessness in the body. They are all signs of purification.

Editors Note: This was republished from an article at The Divine Life Society and the writings of Swami Sivanada who has more work you can read at indiadivine.org. I encourage anyone interested in the science of how all of this works to visit the science section of the website and/or the video hosting channel.