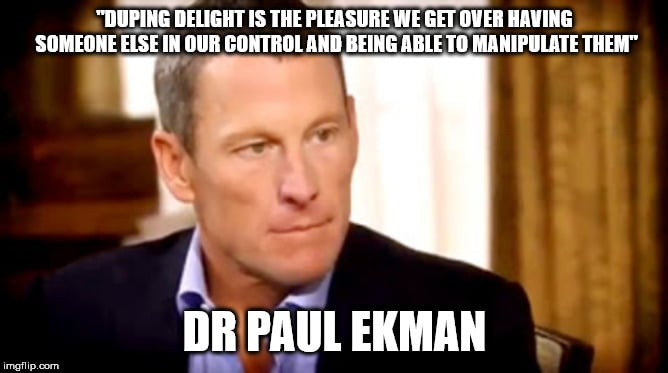 Duping delight is an expression many people interested in psychology will have heard of, but what exactly is it and how can we spot it?

Duping delight is a particular micro expression a person will display that betrays a sense of enjoyment they are getting out of controlling and deceiving another person. It is a very important expression to watch out for in catching dishonesty in a person. In fact it is a form of body language pretty much exclusively reserved for pathological character types such as psychopaths.

The phrase was coined by the psychologist and body language expert Dr Paul Ekman and was defined by him as “the pleasure we get over having someone else in our control and being able to manipulate them”.

Duping delight most often manifests as a grin or a smirk which will flash across a person’s face, and is usually completely inappropriate to the situation or the topic that is being spoken about. The psychopath is either about to lie, or is lying to someone and they are believing it, and the smirk is a leaked expression of pleasure that they are getting away with it.

Control as The Key Factor

As the quote by Dr Ekman emphasizes, duping delight is all about control, and since psychopaths are by their very nature obsessed with control and power over others, they will often display duping delight when lying to others.

The video above contains some excellent examples of this from people in the public eye. It is often expressed for example in psychopathic serial killers who cannot contain their delight at deceiving someone about their crimes and getting away with it.

This relates to another article we recently posted about psychopaths hiding in plain sight. Psychopaths often see their whole life as one big exercise in getting away with things in plain sight, and there is a twisted kind of pleasure they get in being able to get away with so much outrageous behavior and lying.

They know how easily influenced and taken in by glib charm and superficiality most people are, and derive satisfaction out of the sense of control this gives them. It gives them a kick to know that most of the time with most people, they can lie their way out of a situation and get away with it, such is their ability to lie without flinching and break rules without a second thought.

We have embedded another brilliant video analyzing the very revealing body language of disgraced former cyclist Lance Armstrong during various interviews, most notably his “confessional” interview on Oprah in 2013 where he finally admitted to doping after years of denial.

The video is put together by a body language expert and is well worth watching for anyone looking to know more about dishonest body language and speech patterns. The video is absolutely chock full of cues and signs from Armstrong that he isn’t telling the truth and and will be instructive for anyone who has to deal with psychopaths and other manipulative personalities.

The micro expression most common in the videos and most relevant to this article is the “duping delight” smirk, evident on many occasions. Numerous times just before or as Armstrong is making a statement, a smirk will come across his face, often when talking about something that is a serious subject and should not be a source of humor or joking.

David Walsh summed this micro expression from Armstrong up as such, in a 2013 interview where he gave his thoughts on Armstrong’s Oprah appearance:

“Oprah would ask him a question, and the answer that he was going to give was going to diminish him in the eyes (of others) because he was making an admission of something…..and just before he gave the answer you could see a smirk just flash across his face and you thought ‘did that guy smirk there?’. And he did.

And he didn’t want to do that. It was like an involuntary reaction, a tick, and obviously the guy has got personality issues”.

The motifs here are, as always with the psychopath, control and contempt of others. The smirk can be seen as a leaking out of the fact that despite an appearance of being remorseful, they have no remorse whatsoever . It is a sign of what they actually think or feel, not what they are saying.

As Ekman says in the quote we embedded at the top, the psychopath is taking pleasure in the fact that they have another person under their control, pretending to be sincere or honest when in fact they are not.

They cannot contain their glee that they are deceiving someone and the smirk of duping delight is this glee leaking out despite their best intentions to keep it concealed. They often can’t help themselves. They get off on controlling and deceiving others. It gives them a kick inside, particularly when done in plain sight for others to see.

The video contains evidence of many other micro expression often displayed by psychopaths and other toxic personality types. Some of the more common ones include:

These are all things to look out for when trying to decipher honesty or dishonesty in what a person is telling you. Being able to read body language can be a very valuable skill in dealing with psychopaths, given their relentless tendency towards dishonesty in relationships.

See our Resources page for more books and videos on spotting psychopaths in daily life.

EDITOR’S NOTE: This article was republished from psychopathsinlife.com. With all the lies going on in the MSM on your televisions everyday I thought this would be a nice article to follow up my previous article The Hitchhikers Guide To Clown World. I also wanted to introduce the readers to a bitchute channel I really enjoy that decodes body language called Bombard’s Body Language if this topic interests you and you would like to study it further. Hare Krishna

Matthew 10:16
“Behold, I send you forth as sheep in the midst of wolves: be ye therefore wise as serpents, and harmless as doves.”