Esoteric Meaning Of Skull And Bones 322 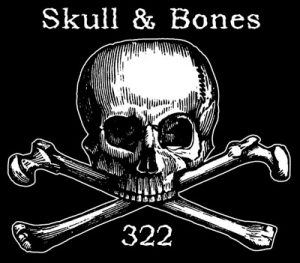 Deconstructing esoteric symbolism is a fun puzzle to solve, the answers are not something you can readily find doing an Internet search. Most opinions you will find on esoteric symbols will be wholesale garbage, for the uninitiated by the uninitiated. It is often the case that the initiates in the order aren’t even told what they mean, it is something you are supposed to discover on your own. I am not entirely sure I should be explaining the symbols like this, there are differing philosophical opinions on whether it should be or even can be done this way to trigger an awakening to higher levels of consciousness.

You can occasionally find someone that kind of knows what they are talking about that is at least on the right track with the philosophical meanings of the symbols, however they still don’t understand their true meaning. The philosophical meanings always come after the true meaning. The secret to decoding esoteric symbolism is that there is always a mathematical principle behind the symbol, if it was designed by a true adept. If you have not found the mathematical principle behind the symbol then you have not decoded it properly.

You may be wondering to yourself “how can math have a Philosophical meaning”? Because math is the way the creator expresses everything in this reality. Numbers have meaning, they are not just arbitrary symbols for some abstract concept. If you read my last article on the number 6 you should remember I mentioned this formula (Fn = Fn-1 + Fn-2) as the formula God uses to create this reality. What does this formula look like in 2 dimensions? The Fibonacci spiral

You may have noticed in the video at the end of the article the galaxies looked like this spiral. 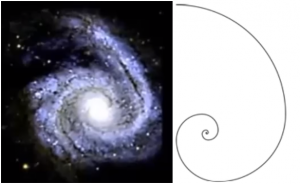 But did you realize this yet? 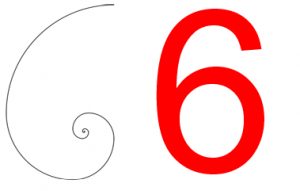 Starting to get a little more interesting now, did you do this in your mind yet? 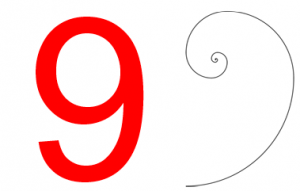 So what does this have to do with the skull and bones? I will get to that, first let’s go back to my last article where I discussed a little about the number 6 again. I want to stress “little” here because the true adept could write an entire book on the meaning of each number and why it is important in this reality and how it is expressed. I didn’t tell you about this next item because it opens a can of worms that as I mentioned requires an entire book to fully explain but I will post a video at the end of the article to help you explore this more. This is called the seed of life. Why is it called the seed of life? Because everything in this reality is built on this pattern, the forces of the creator governing the dynamics of this reality to act in a way to produce this pattern which everything else in this reality is built on, but it all starts with this pattern. 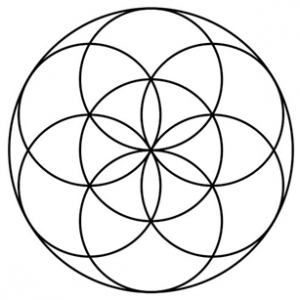 Let’s analyze it, what do we see? I know the average reader does not have an understanding yet to really analyze this properly in depth so I will explain briefly. This is the first complete pattern that can be created with perfect circles, arranged in perfect patterns; God does everything perfectly after all. I know this is a giant leap for the average reader and probably does not make much sense yet, but as I said I will link a couple videos explaining this in detail, for now just trust me, this is how the creator builds everything in this reality. What I see is that there are 6 petals on the flower of life, remember in the last article where I describe 6 being the material world? 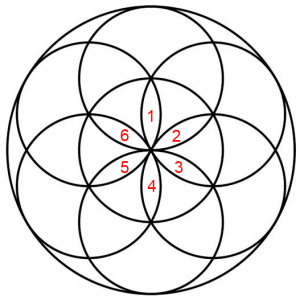 What does this term I use mean, the “material world”? Well, 99.9999% of this reality is imperceivable to our “5” senses. Ahhh, 5 senses? What is referred to as a “6”th sense? Clairvoyance perhaps, psychic powers? You should be getting an idea of how divination works now as well, I will let you explore that more on your own and revisit this topic in the future. Back to the seed of life for now however, how many circles does it take to create the 6 petals in the flower of life? 7 of course, God’s number, the unseen dimension creating the 3d dimension we currently inhabit. 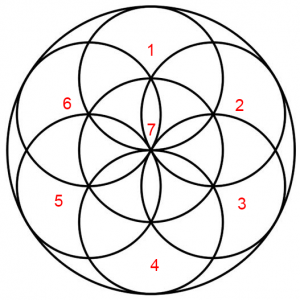 These are very basic explanations and I have to stress “basic” here. But this was needed to move on to the topic at hand, the skull and bones. This is the symbol of the much discussed secret society Bush Jr. and senior belonged to as well as senator Kerry, who luck would have it ran against each other in 2004 for the Presidency. The odds of this happening randomly are 59,211,111,111 to 1 for some fun math. Here is their symbol. 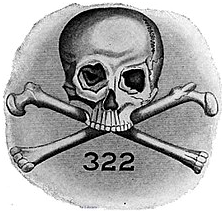 Now let’s analyze it, what do we see? Your mind should already be thinking in the right direction. I imagine you have the numbers 6 and 7 on the brain already right? 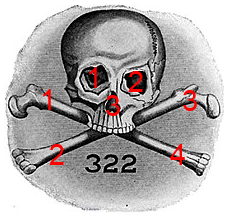 I see the number 7 personally, do you think I am making a stretch here? What is 3+2+2? You may be having an ah ha moment here, but not so fast we aren’t finished yet. What happens if we lift the skull up? 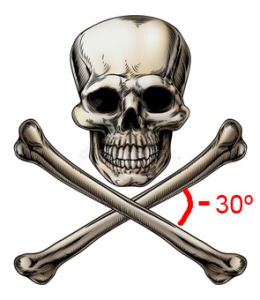 Looks like an X now right? What does X mean in Roman numerals? The number 10 if I’m not mistaken, what is 10+3? 13 of course, isn’t 13 a rather important Illuminati number? 13 Bloodlines, Council of Thirteen etc. 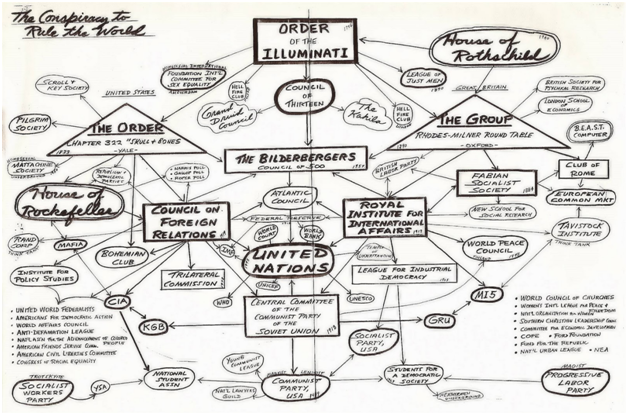 Ok so what does the number 13 mean? Well let’s go back to the way God builds this reality. Below we have the fruit of life, another very important scared geometry symbol. 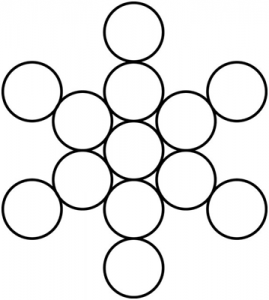 Does it remind you of anything from the last article? How about this? 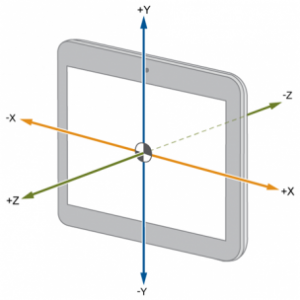 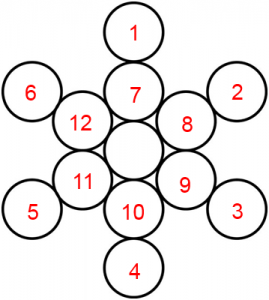 Ah yes the last circle, where all the circles converge when lines are drawn and we polarize it like all things in this reality. 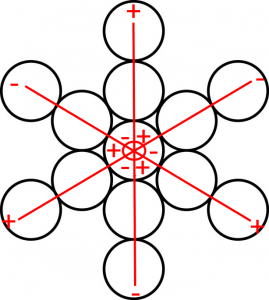 In architecture when building an arch, the most sacred structure by the way, there is a stone known as the key stone. The significance of this stone is that it holds the entire structure together. If it fails the entire structure fails. Every stone mason knows this. In medieval times this stone was known to be so crucial the mason literally had to bet their life on how well they had made it. When building arches in the medieval world the key stone was placed last, it has to be because of physics of course, but when it was put into position the mason had to stand underneath it and if it failed it would kill the mason standing under it when it did so, so the story goes anyway.

So what do we garner from the significance of the number of 13? It is the key stone that connects this 3-D reality together through 6 nodes expressed in 12’s at 30 (3) degree arcs. I know this last part was advanced, and there is no easy way to explain it to the uninitiated, but trust me this is how God does it and I will link you to tutorials to help you understand it.

Ok we have two numbers of very important occult significance 7 and 13 so does 322 just mean 7? No, all symbols have many meanings, that depend on your level of  knowledge and powers of observation to decode, the trick is finding out how the meanings are all connected because everything in this reality is connected, this is the grand Arcanum.

So 7 is important obviously, but also how 7 is expressed by man in this realm is important, which in reality is still just a reflection of the laws of the creator. This is a math formula derived from the Plimpton tablets also known as the Plimpton 322 tablets, ancient Babylonian tablets that have advanced trigonometry (that is not supposed to have existed in this “primitive” culture) written on them in cuneiform. 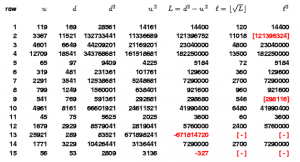 I won’t go into this too deeply for obvious reasons but below is an excerpt from an article by sci-news.com

“The 15 rows on the tablet describe a sequence of 15 right-angle triangles, which are steadily decreasing in inclination,” they explained.

“The left-hand edge of the tablet is broken and we build on previous research to present new mathematical evidence that there were originally 6 columns and that the tablet was meant to be completed with 38 rows.”

“We also demonstrate how the ancient scribes, who used a base 60 numerical arithmetic similar to our time clock, rather than the base 10 number system we use, could have generated the numbers on the tablet using their mathematical techniques.”

“Plimpton 322 was a powerful tool that could have been used for surveying fields or making architectural calculations to build palaces, temples or step pyramids,” Dr. Mansfield added.

I will let you have fun discovering all the gems hiding in the numbers there until my next article I promised about the symbolism of the Black Sun and their badge. I will say now however before anyone jumps to conclusions or asks, no this does not mean the Black Sun were controlled opposition, it means they were smart and knew their business. I will say their usage of the skull bones in this sense most likely meant they were deadly and dedicated to the order and would not betray it even under the penalty of death and obviously the number 7, likely referring to being warriors of God in the Vedic sense. Since it is arranged in the fruit of life/hexagon pattern it likely has significance to blood since the creed is blood and soil and being Kshatriyas, protectors of the folk. It is also rather stylish and the Reich certainly had style. 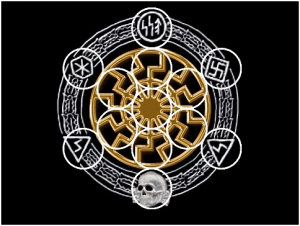 To end with I will say the very exoteric but significant meaning of the skull and bones obviously means danger or death. Giving up these secrets will cost you your life, so I imagine the skull and bones is also a reminder to keep your mouth shut or else. Kinda reminds me of another Illuminati symbol. Wait is that Lauren (((Southern))) the Jewish controlled opposition “alt-right” figurehead?

Can you think of other interesting places the number 13 is used and how this philosophically relates to completion or key stones? 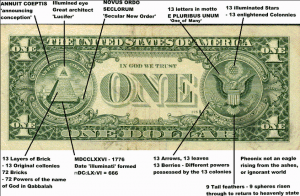 You see, but you do not observe. What one man can invent another can discover – Sherlock Holmes

Here is a particularly good video on sacred geometry by the guys at spirit science and an excellent presentation by physicist Nassim Haramein. I will write articles in the future about much of the material covered in these and other videos on this topic soon.